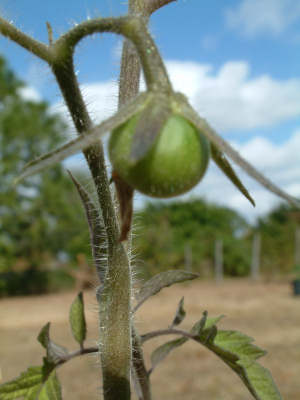 So let’s get going and enjoy! 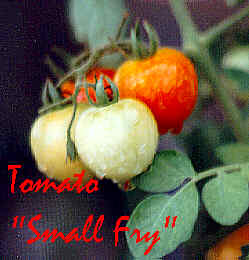 Where Did Tomatoes Come From? The tomato is a New World addition to the diet, originating in South America in the Andes region (Chile, Ecuador, Peru). It was Central American Indians who are thought to be the first to domesticate the tomato. Tomatoes were introduced into the European diet by explorers from Mexico, in the 1500’s. Interestingly, the initial tomatoes brought back to Europe appear to have been yellow, or golden, in color — not the red that is so familiar today.

Are Tomatoes Good for You? Fresh tomatoes are loaded with Vitamins A and C. Not to mention it’s pretty much the best natural source for the antioxidant lycopene.

What Colors do Tomatoes Come In? Just about any color! There are black, white, purple, pink, orange, yellow, red, chocolate and bicolor. Blue tomatoes are now on the scene, and there are even tomatoes that stay green when they are fully ripe!  And let’s not forget about the striped tomatoes — oh my!

What Shapes Do Tomatoes Come In? You’re familiar with the round and oval tomato shapes. But some others include heart-shaped, long sausage-shaped, pear-shaped and even square-shaped (okay, kind of a rounded square, but squarish nonetheless).

Which is Better – Determinate or Indeterminate? It depends on what you want to do with the tomatoes! For example, if you plan to eat some of the tomatoes fresh, but you want to preserve/can the rest, a determinate plant might be your best bet. Since it sets all its fruit at the same time, it helps streamline the canning process. If, however, you want a few tomatoes this week, a few next week, etc., an indeterminate plant might be your choice. Your ripe tomatoes are spread out over a several week period. But why not have at least one of each type, to provide constant fresh tomatoes for a variety of uses?

Is it True That Tomatoes and Peppers are Related? Sure! Tomatoes and peppers are both part of the Solanaceae family, along with eggplants, tomatillos and potatoes! The tomato’s scientific name is Lycopersicon esculentum, which translates to “edible wolf-peach”. (With a name like that, no wonder the tomato was shunned as a food for many years!)

What’s the Difference Between Heirloom and Open Pollinated Tomatoes? Heirloom tomatoes are those varieties that have been around for at least since 1950, and they breed true from seed. In other words, if you save the seeds from a ripe heirloom tomato, you are likely to get a tomato that’s just like the parent. An open pollinated tomato is very similar; it just hasn’t been around as long as an heirloom.  Keep this in mind — all heirlooms are open-pollinated (they breed true to seed) but not all open-pollinated tomatoes are heirloom.

What’s a Hybrid Tomato?  A hybrid tomato, on the other hand, does not breed true. Since it is a deliberate cross between two different tomato plants, hybrids can produce seeds that when planted, can become more like the “grandparents” (which may or may not be a good thing!).  Many times you will see “F1” after a tomato name; that is a tip-off that the tomato is a hybrid.

Why are Hybrid Seeds and Plants More Expensive? To get the hybrid seeds, suppliers must plant two different kinds of tomatoes and cross them to get the hybrid seeds. In most cases, the parent tomatoes are “trade secrets”. It’s also expensive to hand-pollinate the tomato blossoms, to assure the correct cross is made, or grow them in greenhouses, segregated spaces, etc. All this adds to the price of hybrid seeds.

What Kind is Best? It depends on what you want! In general, although vine-ripened hybrid tomatoes grown at home taste much better than their anemic cousins sold at the grocery store, it’s the heirloom and open-pollinated tomatoes that usually win the taste-tests. In addition, if you want to grow your plants organically (or at least with minimal chemical fertilizers), heirloom tomatoes have the tendency to do better. Here’s the caveat; hybrid tomatoes generally have greater disease-resistance than do heirloom. A compromise is sometimes the open-pollinated, which often have more disease-resistance, yet still have a great taste. (I grow and eat all three kinds, although I tend to grow more heirloom than anything else.)  What it boils down to is what is most important to you, and how you plan to use the tomatoes.

How Many Different Kinds of Tomato Varieties are Available? In a word – lots! The Seed Savers Exchange (SSE), located in Decorah, Iowa, lists close to 2,000 tomatoes in its yearbook. However, the SSE catalogs just heirloom and open-pollinated tomatoes; don’t forget that there are still hundreds (if not more) of hybrid varieties. There are estimates that close to 10,000 varieties may exist in the world today.

Where Can I Get Different Kinds of Tomatoes? Why not grow your own? They’re fun to grow, and you can be sure they’re vine-ripened and fresh. Also, growing your own tomatoes allows you to grow the varieties that you like — not what the grocery store buyer thinks you should like.  You can buy a plant at a gardening center or better yet — grow your own from seeds.  Anyway you can get them, once you’ve eaten homegrown tomatoes, no grocery store tomato will ever measure up.