how to grow tomatoes

Here are some tomato plant updates for the week (as well as tomato seed updates).  Sorry I haven’t been around much this week — I’ve been busy with my tomatoes (not to mention with my other veggies).

I mentioned in my first tomato update post that I had three SuperSweet 100 plants, and I was going to run an experiment with them.  One I kept inside in a south-facing window.  Another I took outside to a protected area with strong indirect sunlight (as well as a couple hours of direct sun).  The third I went and planted in its final container outside.  Three weeks later, how did they fare?

It’s been rather cool here lately, so the plant I kept inside in a south-facing window is by far the tallest and has the most leaves.  However, it’s verging on leggy.  I’m keeping it inside for the time being, seeing as the forecast is for temps in the upper 30’s next week — if I sent it outside now, I’m afraid it would have a severe setback.

The one I planted in its final container in the garden is the next most developed; it has medium-sized new growth — not as much as the one I left inside, but it’s stockier — not leggy at all.  It has a nice, dark green color.

The third that I left outside in a protected location is the smallest.  I decided to go ahead and plant it in its final container out in the garden area, so it could get some more growth.  Dark green leaves, though, so that’s good.

All my started to grow quite well by about the 10th, when I potted them up twice since then.   I was thinking I had the red version of Brandywine, but they all ended up potato leaf style, so I either have red Brandywine with potato leaves or pink Brandywine.  Hmmm.  I’ll have to wait and see the color of the fruit.

These are for the Great Tomato Experiment, and they are doing very nicely.  I transferred them to the next size container, and am keeping them inside for now, given that lower temperatures are forecast during the week.  All my Pineapple

seeds germinated nicely, so I have four plants to choose from — the three strongest will take part in the experiment.

I originally said that one of my White Bush seedlings had been going for the sky.  Well, it had, then a short while later it looked like it was going to keel over.  So I brought it inside and hoped for the best.  It hasn’t been until the last few days that it’s started looking healthy — now it’s growing fine again.

The Rest of the Tomato Plants

all repotted up.  I brought one Kellogg’s Breakfast inside, and everything else I left outside.  Yellow Cherry is also outside, but I’m not sure how it will fare.  I probably should bring it inside.

I tried for some of my legacy seeds, and so far, Green Grape and Loxahatchee are the only two up.  I had also planted newer seeds for Tumbling Tom, and they both came up.  For the legacy seeds, still waiting on Black Krim.

Loxahatchee is a strain I am developing.  I originally saved the seed from an unknown globe-shaped tomato that tasted wonderful, and hoped that the resulting plant would also have great-tasting tomatoes.  I didn’t know if the tomato was hybrid or open pollinated, so I wasn’t sure what I’d get.  At any rate, I’ve selected plants for three generations whose tomatoes tasted the best.

Whoops!  For some reason I was down to just 6 seeds — not sure where the rest ran off to.  So I carefully planted 3 of the seeds.  Two have germinated so far, and hopefully the third as well.

For these, I want to do two things.  First is still select the largest of the great-tasting red globes — that will be two of the plants.  The third plant I want to use as the female cross with another tomato variety.  Not sure which I want to use for the male parent of the cross.  I’m debating using Pineapple, Kellogg’s Breakfast or maybe Druzba.  I’ll have to see how this generation fares, first.

.  (If you plan on planting seeds and need some guidance, check out the germinating tomato seeds post.)

With Tomatoes and Flowers

Almost forgot, I have tomatoes on Patio, Celebrity and Husky Red (a cherry-type).  I have more blossoms on all these, plus also with Mr. Stripey (Tigerella) and Park’s Whopper.  It’s been a cooler winter than normal, so everything is growing slower than usual; I should have already had at least some almost-ripe tomatoes by now.  I’ve still got a ways to wait, though.

It’s time to learn about tomato growth requirements — what they like, in order to grow best.  While individual varieties may be better for warmer or cooler climates than you average tomato, you still need to know the basics.

With that thought in mind, here are the basic requirements for growing tomatoes.

Like most fruits and vegetables, tomatoes require at least 6 hours or direct sunlight a day.  If you live in a super-sunny and hot location, your tomato plants might appreciate some dappled shade in the afternoons, to help prevent against both wilting and sunscald.

Tomatoes also require warm weather — frost will kill them. The ideal temperatures for most (not all!) tomatoes is the mid 70’s to low 80’s during the day, with nights in the mid 50s to mid 60’s. (Temperatures in degrees Fahrenheit.)

In an ideal climate, there should be a 15 to 20 degree difference between day and night temperatures.  However, when the nighttime lows are routinely in the 70s, the plants might not get enough of a cool-down to set fruits well.

However, tomatoes will grow and set fruit in warmer weather, as well as in cooler weather; they just won’t be quite as productive. Keep your local temperatures in mind when selecting tomato varieties.

For example, a grower in the cool Pacific Northwest would be better off with early tomatoes (those that mature in 67 days or less), as well as tomatoes that are bred for cooler weather. On the other hand, someone in the desert Southwest would be well-advised to select tomatoes that have a good track record of bearing fruit in hot weather. 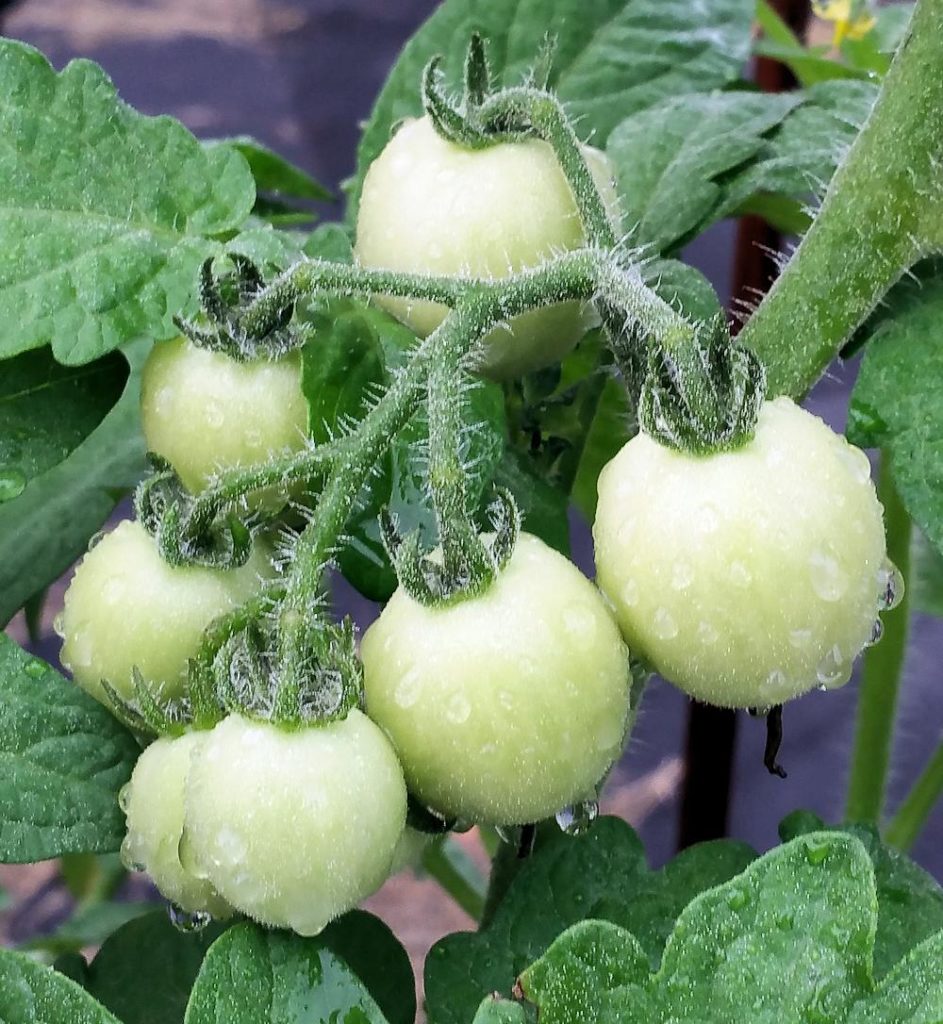 So, keep your local climate in mind when selecting tomato varieties. Oh, and an adequate water supply is essential for tomatoes to produce fruits; an average of an inch of water per week is considered optimal, but if you live in a dry climate, you might want to provide a bit more; tomatoes can get thirsty!

And if you live in a hot and humid climate, like the Southeast — be especially careful with your fertilizing schedule, and know the tomato diseases that thrive in a hot, humid environment.