Seasons in the Sun 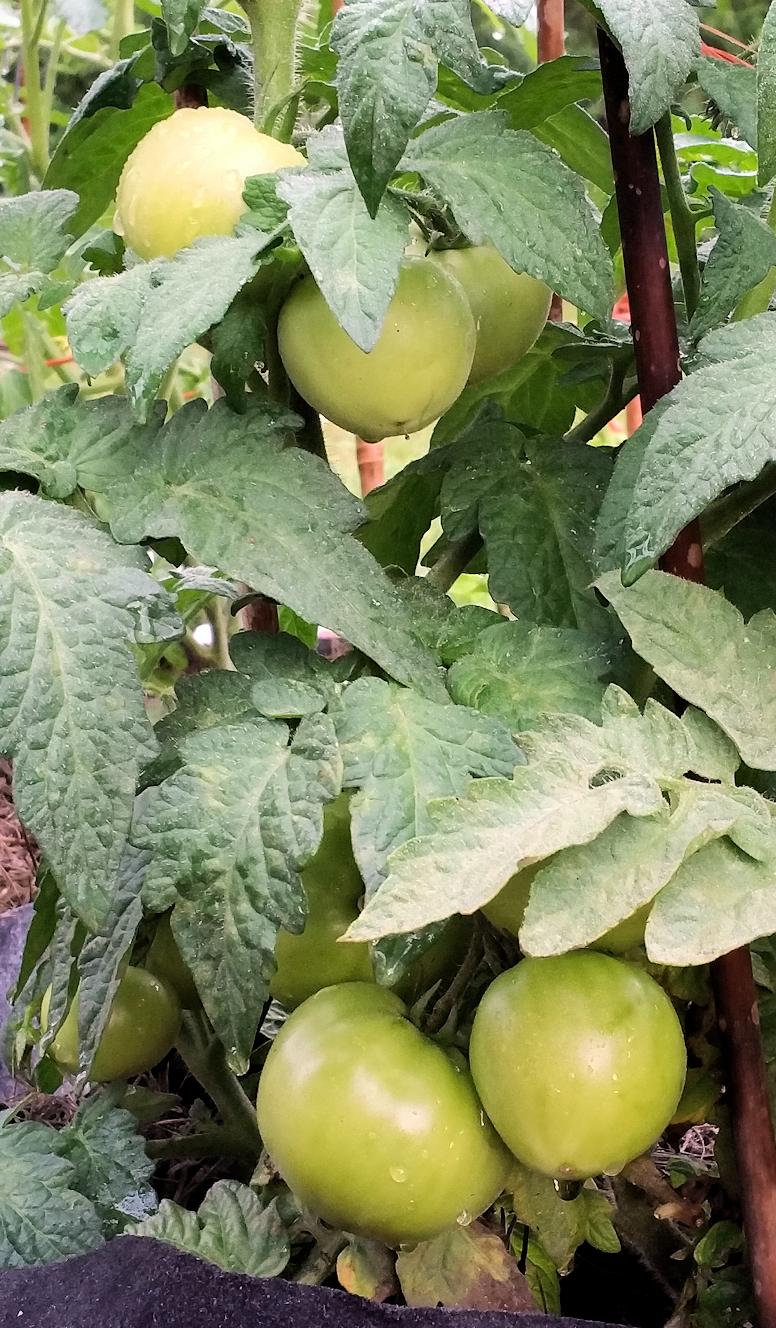 For the most part, we don’t have much in the way of freezing weather here in South Florida.  Sure, we do get cold snaps in the winter, and we do see the occasional frosts and freezes, but for the most part, winter is mild for the plants.  If you’re able to cover your tomato plants when a frost hits, there’s a good chance it will survive.

From about late January through the end of April is our prime growing season, give or take a week or two in either direction.  It’s basically mimicking what happens in the more northerly parts of the county – just several months earlier.

Our secondary growing season is from about the middle of August through to about Thanksgiving.  We start out really hot, and it doesn’t start cooling down until around late September.  However, by then the tomato plants are in flower and have less of an issue with setting fruit.

Summer and the Evil Twins

Seriously, while tomato plants like the heat, they don’t like humidity — at least, not for months at a time.  Our nighttime lows are the summertime highs in other parts of the country.  And that is the big problem.

Tomatoes – most varieties  that is – don’t set fruit well in  high sustained heat, especially when they don’t get a chance to cool off at night.  The large-fruited varieties are especially prone to either dropping their flowers, or not flowering at all when it gets really hot.

The humidity takes a toll as well.  Various kinds of tomato blights thrive in humid weather; the bacteria and fungus move in and the leaves start turning yellow and brown or black spots – yuck!

Now, this isn’t to say that you can’t grow tomatoes in South Florida in the summer — just that it is way more challenging.

In the late winter through mid-spring growing season, you can grow just about any variety.  Peruse the catalogs and online stores for intriguing tomatoes.  Just remember that if you plan to grow your plants from seeds, you need to plant those seeds (indoors) around the beginning of December.  (I have a video that I’m finishing up that talks about planting seeds; I’ll post that here when I have it ready.)

Alternately, if you’re like me in some years, you can purchase your starts from a nursery or big box store and transplant them into the garden.  I tend to do a little of each, LOL.

Either way, your best bet is to get them into your garden by the middle to end of February.

Some larger-fruited varieties I have grown successfully include Kellog’s Breakfast, Cherokee Purple, Black Krim, Pineapple and Red Beefsteak.  Other varieties I like are Better Bush, Eva Purple Ball, Loxahatchee, Black Prince and Druzba.

I’ve also grown Pink Brandywine — the only issue I have with it is a low production; I don’t get all that many tomatoes (although the ones I do get can be huge).

Of course I’ve grown far more than just the ones I’ve listed — these are just the ones that stand out in my memory. Wait — what about cherry tomatoes? 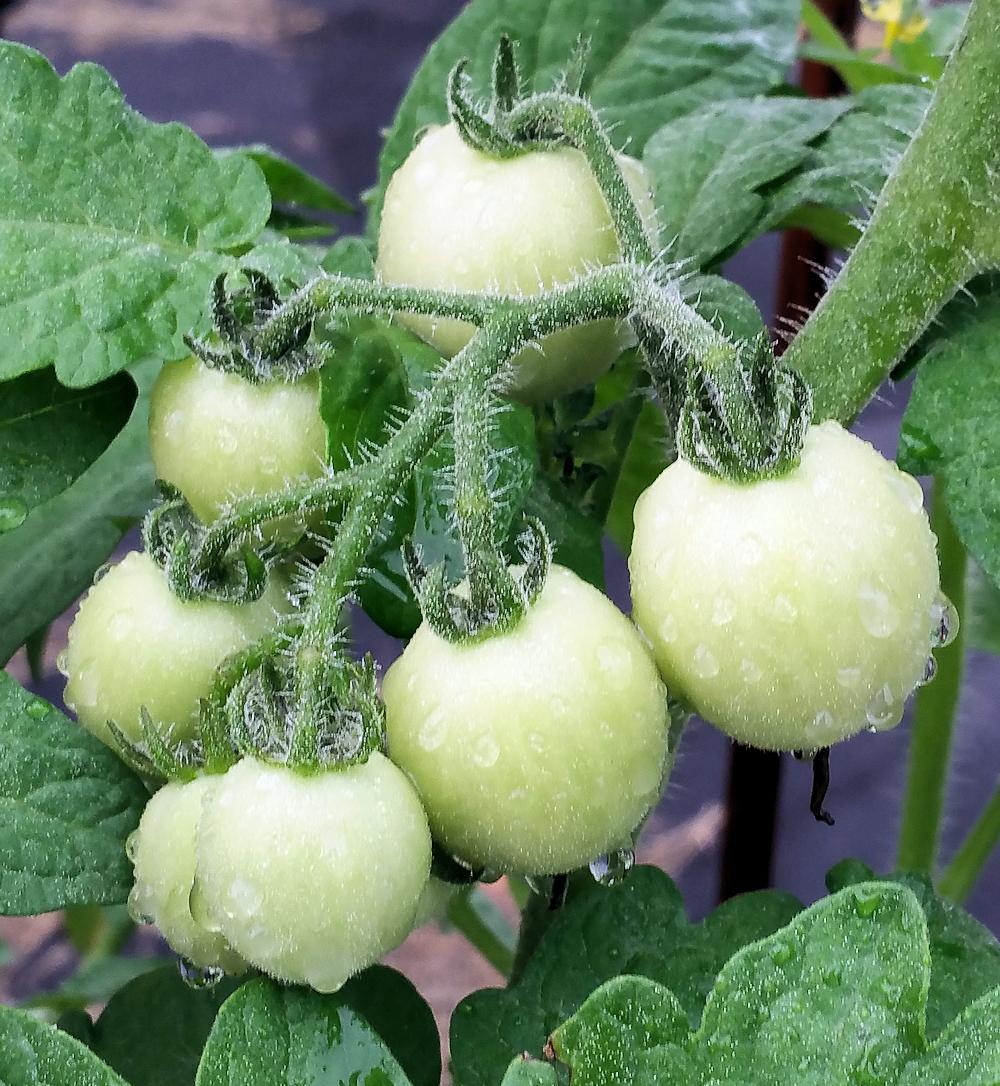 These are the saving grace for those of us who are homegrown-tomato-starved during the summer (and all year around, actually).  Cherry tomatoes tend to still produce during the high heat and humidity.  Maybe not as much as during the cooler parts of the year, but you can still grow them.

I’ve grown all sorts of cherry tomatoes, including  Black Cherry, Husky Cherry Red, Isis Candy, SuperSweet 100, and Juliet to name a few.  It’s getting to be late March, and I am still planting cherry tomato seeds for summertime snacking and salads.  This summer I am going to try Indigo Cherry Drops and Rapunzel.  I’m also going to try to keep my existing varieties (Isis Candy, Black Cherry, Juliet and Husky Cherry Red) growing.

Can you say “terrible” (except for the area around Lake Okeechobee)?  It’s sandy before you hit a hardpan of clay, and devoid of nutrients.  The only way you can deal with it is to incorporate a lot of compost.  And I do mean a lot — when I was doing in-ground gardening, I easily used 80 bags of compost when I got started.  Fortunately, every year your soil will get better and better with the compost, and you will only need to add smaller amounts.

Your other options are raised beds or container gardening.

One last word is about insects.  Tomato hornworms can decimate a good-sized plant overnight, and we get plenty here.  Aphids can also be a problem.  Fire ants are also issues (oh how I hate them!).

Nematodes can be a problem.  Marigolds planted among your tomatoes will help with that.  Or, do as I did — I moved everything to containers.

In the warmer, wetter parts of the year, you’ll also need to allow for mosquitoes.  The tomatoes won’t suffer from them, but you will!  You can’t get rid of them, but you can try to keep your garden dry (no standing water) as well as strategically place some plants that mosquitoes tend to not like around your garden.  This year, I got some lemongrass cuttings and put them in 3 gallon pots.  When they root and start growing well, I will transplant them to 5 or 7 gallon containers and move them around in the garden.  We’ll see if it works!

Growing tomatoes in Florida, especially in South Florida, is something that I have a great deal of experience with. So, for all you Florida gardeners, here are some tips for growing some luscious, vine-ripe tomatoes of your own! 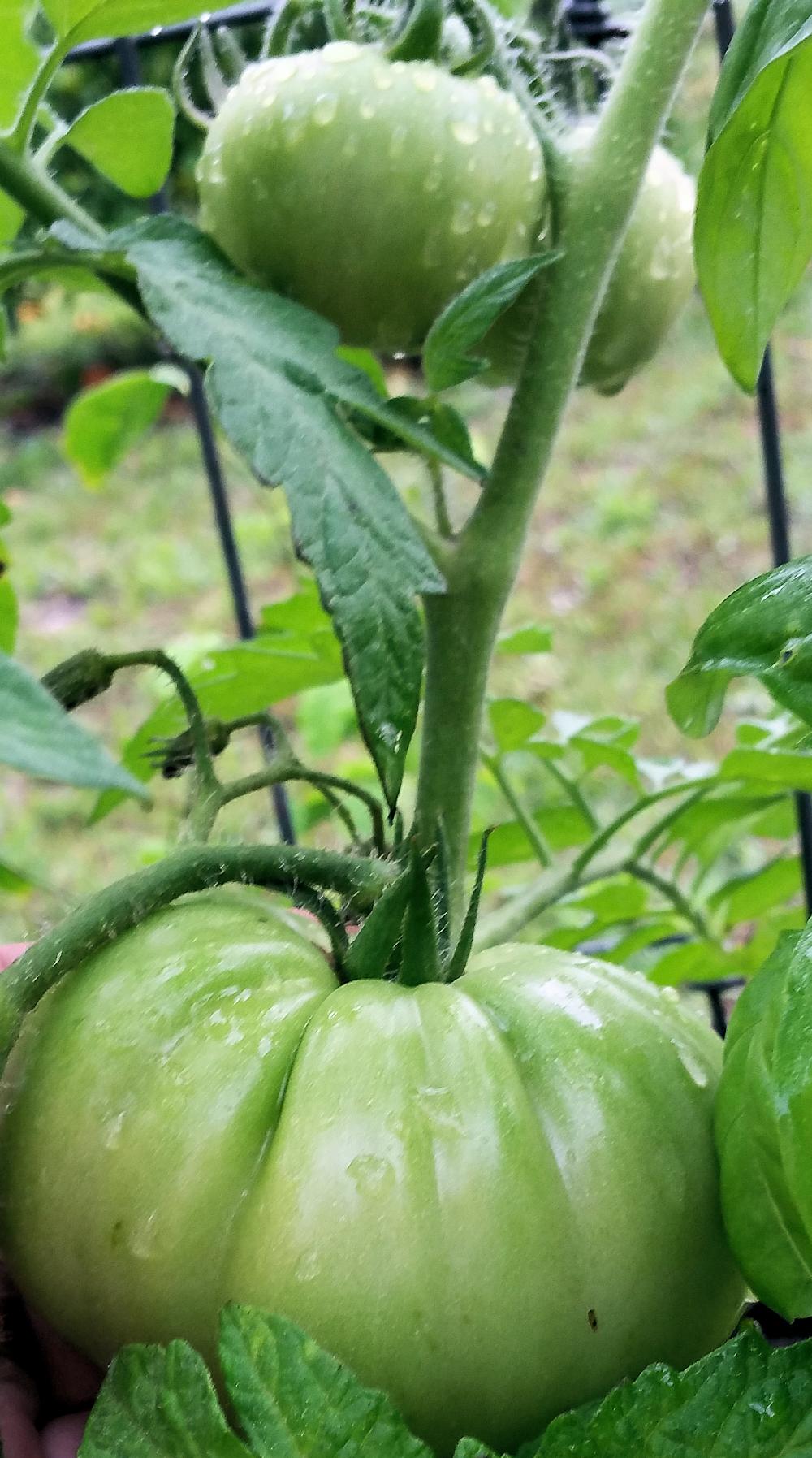 (South Florida gardeners — here are some special tips for you.)

Here in South Florida, you can grow tomatoes practically year-round…with some caveats. One is that if you have ever had a frost during the winter, don’t grow a large tomato garden in winter, unless you are prepared to cover your tomato plants or you have them in containers and can bring them inside.

Here’s a sad but true story. One year I planted a gorgeous tomato garden, with at least a dozen plants (probably closer to two dozen). It had been a cool, but not cold, Winter, with sunny days. Beautiful growing weather!

Alas, one night it was expected to get down to around 40 degrees. I debated covering the plants, but figured they would be OK. They probably would have been if the temperature had stayed around 40. Unfortunately, they plunged to the low 30s, we got frost and my tomato plants died. What made it worse was that they were bearing a wonderful crop at this point! I was able to salvage some of the ripest (although still green) tomatoes, but lost most of the crop.

If you want to grow a Winter crop in South Florida, plant your seeds in September. I like to plant heirloom tomato seeds in the winter, as well as at least one variety of cherry tomato like Supersweet 100 hybrid

Spring is great in Central and South Florida. Generally mild with mostly sunny days, it’s a wonderful tomato-growing time. North Florida can still get chilly, though, so plan accordingly if you live in the Panhandle or around Gainesville and north.

Spring is the end of the Florida dry season, so remember to water accordingly, as the sun is getting stronger each day. Especially in South and interior Central Florida, it can get mighty hot in late Spring.

To harvest a Spring crop of vine-ripe tomatoes, start planting your seeds in December to late January. I usually plant a mix of heirloom tomato seeds, as well as hybrids.  Some of my favorites include Cherokee Purple, Black Prince, Red Pear, Kellogg’s Breakfast, Celebrity, Better Bush and Supersweet 100.

Growing Tomatoes in Summer in Florida

For Florida in general, Summer can be brutal on your tomato plants. Nor only is the sun exceedingly strong, but it’s hot and humid — excellent conditions for mildew and gray spot to develop. I tend to not grow many tomatoes in Summer in Florida — I used to, but the heat and humidity just made it too difficult to get a good harvest.

Another problem you may run into in South and Central Florida is plants growing too fast and developing lots of cracks. So the tomato varieties I do grow are generally cherry- to medium-sized.

For Summer tomatoes, I sow seeds sometime in March.

Fall can be a nice time of year to grow tomatoes, at least in South Florida. If you live in North Florida and the Panhandle, you’ll want your main crop in for harvest by mid to late October. Central and South Florida can extend that a bit into November.

Fall’s main issue is how cold it gets how fast. Here in South Florida, we can get nighttime lows in the low 40s as early as November. I know this year, it’s been into the 20’s and 30’s in North Florida by late November — too cold for warmth-loving tomatoes. So the further north in Florida you live, the more you’ll want to consider growing your tomatoes in containers that you can bring inside when you get really cold snaps.  Or — grow early tomatoes, so they ripen before the really cold weather hits.

For Fall, I like some of the cherry tomatoes

and a bush type like Better Bush hybrid tomato

For a fall crop, I sow the seeds around mid-July.