I talked about hybrid tomatoes in part 1 of this post.  Now that we’ve discussed the cherry varieties, let’s talk about how the slicer-size hybrids are doing in the garden.

Hybrid Tomatoes in the Garden

Just as a review, I have the following slicer-sized hybrid tomato plants in the garden:

All these plants have there own merits, but so far, Fabulous has been, well, fabulous!  It’s by far the most vigorous, and has a nice, healthy growth, and regular leaves.  I have it growing in a 5-gallon container, and it behaves as if it were in the ground – very lush and full of blossoms.

There aren’t any ripe tomatoes yet on Fabulous (darn!), but I’m looking forward to them.  If they taste even half as good as the plant currently looks, it’s earned a continued spot in my garden.

And how have the others fared? 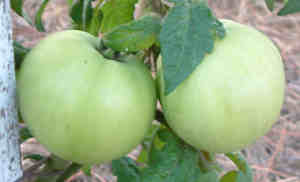 Bush Goliath has been the most prolific to date, and the tomatoes from one of the plants has been fairly good; the other one’s taste has been forgettable.  Both plants currently have ripening tomatoes, so we’ll see how this batch does.  Bush Goliath is a fairly small plant in my garden, at just 16 inches tall, with rugose leaves.

Celebrity Bush has had a hard time with the cold weather this year.  While it’s normally quite productive, this season’s chillier-than-usual winter has taken its toll.  It has come back some, now that the warm weather is here to stay.  I’ll keep an eye on it.  This plant is about 12 inches tall at the moment, and has rugose leaves.

Park’s Whopper currently has the best tasting fruit of the group.  The winter has been hard on it as well, but it’s coming back and producing some nice tomatoes.  Had a great one on a sandwich yesterday!  The plant is now at 12 inches tall (the February frost nearly did the plant in totally), and has regular leaves.